California Prenuptial Agreements | Should You Get a Prenup? 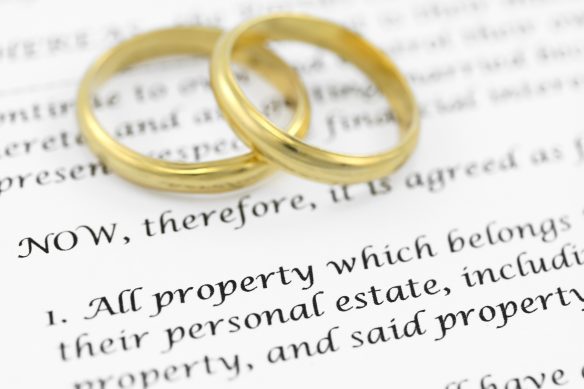 Most couples rightfully believe their marriage is the “happily ever after” sort.  However, their odds are only 50/50, because about half of marriages end in divorce.  This rate is even higher for subsequent marriages.

With these facts in mind, fiancés should consider whether a prenuptial agreement, also known as a premarital agreement or prenup for short, is in their best interests. However strong love feels in the beginning, relationships change for better or for worse.  Premarital agreements can protect the property rights and financial interests of each spouse if the marriage takes a turn for the worse, or if one of the spouses dies.

Premarital agreements may cover a wide variety of topics, but generally pertain to property rights. In California, in accordance with Family Code section 1612, spouses can negotiate:

A California prenuptial agreement may also include provisions regarding debt liability, support for children from previous marriages, and the obligations of each spouse during the marriage, such as savings contributions or putting either spouse through school.

However, premarital agreements may not include provisions regarding illegal activities, and will not be recognized if the contract does not adhere to California’s prenuptial agreement requirements.

According to California’s Family Code section 1615, premarital agreements must be in writing and signed by both parties.  Each party has the right to:

Even if these conditions are met, a California prenuptial agreement may still be overturned in court if the contract includes invalid provisions, such as terms that negatively impact a child’s right to support, or any portion considered unconscionable, meaning the terms are grossly unfair and might leave one spouse with undue hardship while the other disproportionately benefits.

Weighing the Pros and Cons of a Premarital Agreement

There are many reasons spouses might benefit from a California prenuptial agreement, including guaranteeing the protection of inheritance rights of children from previous marriages; preserving the interests of a business or professional practice in the event of divorce, ensuring a former partner cannot take over, control, or break up the business; avoiding assumption of the other spouse’s debt; and detailing each spouse’s share in household and financial responsibility and decision-making during the marriage.

Of course, such agreements have their drawbacks, too. Under a prenuptial contract, a spouse might give up rights that they are otherwise guaranteed under California law, such as the inheritance of a portion of a deceased spouse’s estate, or receipt of spousal support. While an agreement’s provisions may seem fair or reasonable initially, especially during a couple’s “honeymoon” phase, the terms may not serve the best interests of both parties, or prove unduly burdensome, in the future.

Before signing a prenuptial agreement in California, please contact Norman Dowler’s seasoned family law attorneys. With any contract, it is always best to seek separate legal counsel to ensure your best interests are protected.

View all posts by: Sam Javanmardi